My First day in the DFAT. Davao bloggers are awesome!

This was not my first time to land in the beautiful city of Davao. Just a week before this trip I was already able to have a surprise flight to Davao for a Davao Adventure Package by Airphil Express.

This time however I came here for one very important reason: TO EAT.

Avatar Media organized this annual Davao Food Appreciation Tour and this year I got lucky and was allowed to join this most awesome food tour.

From Cebu to Davao

I just got out of my last class of my college life and I was finally heading off to largest City in the world: Davao. If one will ask me about Davao I’ll usually answer nature-related topics to him but boy was I ready to be showered with information on all the good stuff in Davao. I came quite late and wasn’t able to meet the rest of the bloggers from Davao but I got to meet some awesome bloggers anyway. If there’s one thing I noticed about female bloggers in Davao, they’re all beautiful, fashionable and always ready for an instant photoshoot. The bloggers were then treated for a dinner buffet in the Ranch. I love the Tuna in Davao. Tuna Sashimi was absolutely delicious. Thank you San Miguel Brewery for the awesome dinner! But if I may recall, it was the mind games that made the dinner even a lot more fun. Ate Leah’s facial expression was just priceless. Kuya Orman, your acting was also hilarious. 😛 another group picture right after the major photoshoot session

Then we headed over to Cafe Firenzo for some cakes and coffee. It was there when the group started to even further warm up with each other and who can forget the impromptu photoshoot in the Cafe. The next day I went with some family friends: Tito Gilbert and Tita Helen and their kids the three Musketeers: Hans, Sean,and Kyl .Wer went to Samal Island where we went swimming in Paradise Island Resort which I believe is owned by the Florendos.

Nice resort if you’re after a nice breakfast, a small safe beachfront and if you’re a little daring, there are some deeper waters and trench just 3 minutes away. For lunch on the second day we went to Ranchero. I’m not much of a ribs fan and I’ve had several instances when i would say “no” to ribs no matter how hot or steamy it is just in front of me. I guess this was one of those rare moments when the ribs presented to me was just too good to ignore. Guys, I tell you, Ranchero ribs is something you shouldn’t miss out.

Right after our lovely Ranch Lunch in Ranchero the group then headed over to Zipcity Zipline. Since I already had my chance to go Ziplining in Zipcity in my previous Davao Adventure I just passed this one but hey, I’m sure it was a nice way to finally break one’s Zipline Virginity (pardon the term), so if you’re stil a zip-virgin this one is a nice way to have a simple taste of what ziplining is.

Right after the zipline some of the guys in the group went to try the ZORB ball. I skipped it for now because you needed two people in the ball. I prefer to go Solo. LOL I love Gelatto. I also love crepes. What happens if you put the two together? You get Crepelato.

If you’re looking for something sweet in Davao, I most definitely recommend Crepelato. SUPER DELICIOUS TREAT in a plate. What’s more, they have eat all you can option 0___0 one way ticket to Diabetes please. Sigh, if I had the power to indulge… I miss Crepelato just thinking of it now. People’s Park has several works of art and it’s so beautiful at night that one can’t but fall in love with the surroundings. Whether you’re dating or just going around on your own, you can’t stop looking around at the beauty that surrounds you. There’s even a water fountain musical show thingy. If you talk to Davao locals you often hear about this ‘hidden food paradise’ in Davao. I remember Winst raving about Lachis and when we talk about food he would say, “That’s nothing compared to Lachis”.

As a (pa-feeling feeling lang) food critique (weh) I must be very objective as to what I have to say about Lachis..

IT…. WAS…. AWESOME! Definitely makes it to my favorites list in the whole DFAT 2011. So much for being objective. I recommend the ribs, the oriental pork and especially the Sans Rival. However, what remains close to my heart, soul, mind and stomach: the Sour cream cheesecake. FOODGASM FTW!! This has to be one of my fondest memories in the DFAT 2011.

A lot of people know my love for birds. And you know what they said about a bird in the hand is worth two in the bush? Hell yeah it’s worth it!

After a cool Bird talent show led by Bo Puentespina we headed over to the HUGE aviary where we could actually handfeed the birds. Not much on variety but I was still overwhelmed by the number of birds in the Aviary 😀 After 20 years of my life, I FINALLY SAW A PHILIPPINE EAGLE!

Ate Ria can attest to my eagerness and enthusiasm to see the National bird of the Philippines. Try out the Rissotos. Love em! And remember, Authentic Italian Cuisine IS NOT fastfood. I’m a mountain kind of person so it was a thrill to visit the mountains of Davao and finally see Mt. Apo in its full glory (though wasn’t able to take a full shot by then). Thank you Ate Ria for picking me up, I woke up early but then fell asleep again T__T So sorry. T___T
It was a long long ride going there. I felt like we were on an Indiana Jones adventure ride. By the time we got there we were hungry for some native dishes. I won’t ever forget the Bamboo pressure cooker. The food was great, the villagers friendly. And I won’t mention what took place in the viewdeck T__T that is for Robbie, Mark, and I to know and for you not to find out. 😛
Pixie’s Grill We then went for lunch in Pixie’s Grill. The food is good but I would like to emphasize on their unique Boneless Bangus. I’m just glad it really is boneless (as in free of bones) Bangus rather than bone-less (lesser bones on the Bangus) Bangus which I tried elsewhere.We were told not to overindulge because we had another treat ahead of us.Tiny Kitchen (yeah, their kitchen is REALLY tiny)Paella from Tiny Kitchen

They told us it was gonna be a light lunch.

I say that was one awesome tiny kitchen.

Just to warn you ahead, the place is really tiny. The name wasn’t just a brand, it’s really a tiny kitchen in there. Nevertheless, the place can produce some gastronomic delights! There are several choices from Paellas, brazos, pizzas, cakes, and more! You can always go back to try something new.

THIS IS A MUST-GO-TO food trip destination! As the name suggests, it’s a fast food restaurant that serves, yes, wings AND dips. Now if I merely put it that way I know it doesn’t sound too delicious. So lemme explain just what makes me wish they opened up in Cebu. They have really cool packages where you can choose between servings of pasta, different delicious dips and lastly, chicken wings… in different flavors. Variety is their key feature.

Oh and special mention for their fish and chips (yummy!) And here we were for our last stop for the whole Davao Food Appreciation Tour 2011. It was indeed fun and of course the best way to end it was to stop by in a coffee shop. Cafe Demitasse is definitely one of the largest coffee shops I’ve seen around in the Philippines. I love how they have a very beautiful interior design. The chairs were great! And I do love their banapple cream pie thingy (gosh I suck at memorizing the names).

Farewells made in Davao baywalk And what is the best way to end a beautiful tour but to bid our farewells in a beautiful place: Davao Baywalk.

Seeing places like Davao People’s Park and Davao Baywalk makes me conclude that Dabawenyos are very artistic, creative, and expressive people. The Davao Baywalk contains some replicas of different artworks such as the “David” Statue and “Little Mermaid”. We visited the beautiful place and took a few group shots before bidding our inevitable farewell.

First of I would like to thank Avatar Media for organizing this beautiful Annual event. Thank you ate Ria, Ate Dulce, koya Drew, Koya Lyle, Ate Brendel, and all the rest of the Davao bloggers who welcomed me.

I would also like to thank Tito Gilbert, Tita Helen and kids for adopting me for that almost-week long adventure. I will never forget your warm hospitality.

And of course, what would bloggers do without the sponsors who made it all possible: 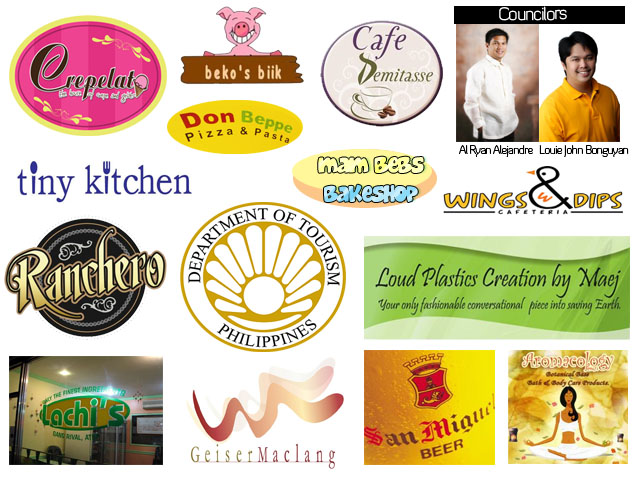 Thanks Mark for the photo of the awesome sponsors 😀